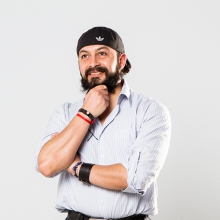 I’m a Mexican graphic designer, born in Chihuahua in 1979. Since before I was one, I’ve been travelling from city to city, and I’ve lived in a total of 9 cities in Mexico (5 cities before I started my degree). Due to this, I’ve always considered myself a foreigner. I wasn’t from here or there, until I settled in Ciudad Juárez. I studied my degree in graphic design in Chihuahua at the Escuela Superior de Comunicación Gráfica (ESCOGRAF), where I received an automatic qualification. I’ve worked as a graphic designer for more than ten years, and as university lecturer for more than four. Both periods of work have played a large part in my life, and graphic design has been a very gratifying experience because conceptualising, preparing, creating, communicating and launching a product or corporate identity, as well as designing publicity campaigns for new or more established businesses, generates a great deal of learning, which I have transformed into experiences that have been of great help in my role as university lecturer, as that is the best way to contribute to learning. If, one day, I had to choose between either teaching or graphic design, I would without a doubt choose the former, since it requires constant preparation, updating and, for me, there’s no better satisfaction to be had than training the graphic designers of tomorrow.

Sign up in the pages of IED and will give you the Desing Pass to attend our events, download our magazines and design ....