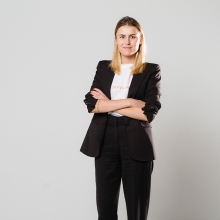 It's a known fact, that fashion industry in Russia right now in its very infancy. Historically, a lot of economical and political factors made its existence barely possible. But since the Iron Curtain fell, a new generation were born, generation from what the tens of worth-to-know self-made designers came. Being raised on the western culture achievements, although still living in the ruins of the Soviet Union, formed their original vision.

Still, the puberty of Russian fashion industry and lack of information about it formed its curtain image in the international scene - almost nobody in the European market considers to have a look at the young DIY Russian brands.

MINLOVE is an online platform that provides information about everything that is going on right now in the cultural sphere of life of the modern young Russians, such as fashion, art, music, cinema etc. You can also easily find and purchase the items from the best Russian designers here. The name of the brand combines in itself the values of the two worlds – the one described in George Orwell’s “1984” and the one that we all live right now. Like in Oceania we live doublethinking. Black will become white, if someone prompt us to think like this. It's not a secret, that Orwell in its novel reflected Stalin's Russia and the actions of KGB. Ministry of Love proclaimed that it deals with law and order, when in realty it did tortures and brainwashing. Like in Oceania today people try to live according to the imposed standards of beauty. The clothes that young Russians create don’t answer this standards, but its only for those who can appreciate the idea behind it, for those who has enough confidence to wear really beautiful things. Its not for everyone, NOT CONVENTIONALLY BEAUTIFUL.

EXTRAODD : THIS IS NOT A MISTAKE

THE BEHAVIOR OF MATERIALS

Exhibition Why Not Design?

Masters of Design and Innovation 2017

Masters of Design and Innovation 2016

Masters of Design and Innovation 2015