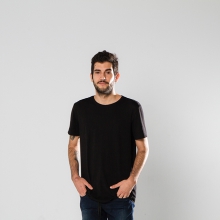 The project tries to raise awareness about the refugee problem, to get people to understand its severity and to encourage them to become involved in trying to reach a solution that gives Syria the chance of having a future. It’s a project of great necessity and urgency, as everyone deserves to have a home in which they feel safe, which is not the case now in Syria, and it’s our duty to offer them one. The project involves being consistent with European values, and demonstrating that we’re a caring society, and that even in the context of a crisis we do everything we can so that nobody is condemned to suffering or death.
The project focusses on children, understanding that they are the only chance that Syria has in order to have a future and to be rebuilt.

This project is the perfect example of what publicity can also do to help make a better world. The project tries to find the best way to make an impact, and reach people, with real-world accounts which permeate through to the heart of the viewer, not allowing them to remain mere bystanders to the conflict, to understand that small gestures on a grand scale do add up to something and can even change the world, and that this is not a utopia but a reality. The idea is to take a close look at the problem, far from the media’s constant frivolity. The final result will be a horror film, which is a vehicle that reaches many people and which is what many people need in order to get involved in changing the future for the Syrians.

Syrians are fleeing their country because of fear, and I want to make their fear our fear-- by sharing this we can create an incredible empathy which forces everyone to get involved. There has to be a change in the modus operandi in the European halls of power. The Syrians are still waiting for an answer. Film would be the medium used as a call for action, and the action would be to create a housing plan to take the Syrian children out of harm’s way, and give them a chance to have a normal life and to keep hold of their childhood and their innocence for as long as possible. All of the measures carried out in the project are aimed at achieving the greatest possible impact, hence the involvement of the Sitges Festival and a renowned director. Additionally, the rules and mechanisms of traditional horror movies will be subverted.

EXTRAODD : THIS IS NOT A MISTAKE

THE BEHAVIOR OF MATERIALS

Exhibition Why Not Design?

Masters of Design and Innovation 2017

Masters of Design and Innovation 2016

Masters of Design and Innovation 2015